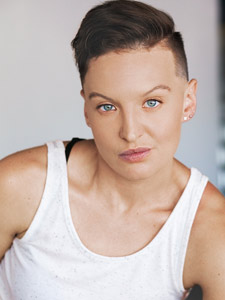 Caitlyn Grace is a Hillsdale College graduate from southern Michigan, where she earned her BA in Economics & Theatre Performance. While in attendance, she pole vaulted NCAA Division II on the track team, became a PADI certified open water scuba diver, and completed OCS Platoon Leaders Course with the United States Marine Corps. From there, she began pursuing stage and film combat, receiving her utility stunt certification from the United Stuntmen’s Association in 2012 and performing in the world’s largest live stunt show, Mirage Entertainment’s “Count Down to Ruin,” in Guangzhou China. Returning to the US to pursue weapons training and fight choreography, Caitlyn became an “advanced actor combatant” with the Society of American Fight Directors and an orange belt in Presas Arnis (Filipino Stick Fighting). In 2014, she began teaching and organizing stage combat workshops as well as choreographing and fight directing for outdoor dramas and university productions. In 2017, she opened Feld Entertainment’s national tour: “Marvel Universe Live!: Age of Heroes,” as the Guardians of the Galaxy’s taser twirling space pirate, Nebula. Having recently retired her tasers and relocated to Los Angeles, Caitlyn is pursuing the stage and screen as an actress, stuntwoman, choreographer, and fight director. She is currently training on the AXS channel’s WOW “Women of Wrestling” roster and is set to debut in 2020.