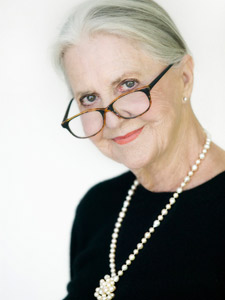 Joanne Linville worked and studied closely with Stella Adler in both New York and Los Angeles. She began her television career in the 1950’s, playing in anthology series such as Studio One, Kraft Television Theatre, Alfred Hitchcock Presents and The Twilight Zone. Ms. Linville has appeared in many television series including: Bonanza, Gunsmoke, Hawaii Five-O, Kojak, Charlie’s Angels, Dynasty, and L.A. Law to name a few. She is best remembered as the female Romulan captain from Star Trek: The Original Series. Ms. Linville has taught in both New York and Los Angeles.

Her class, The Power of Language, is a unique and beautiful approach to the work that stands on the shoulders of Stella’s Technique. Her book, Joanne Linville’s Seven Steps to an Acting Craft, is available on Amazon and other locations you buy books.