All students must submit a picture of their Covid-19 Vaccination Card when registering or email to alex@stellaadler-la.com.

Full-time students have been automatically enrolled into classes. Please log into Orbund to check your schedules and then confirm with Alex, via email, that you are planning to continue (if you have not done so already): alex@stellaadler-la.com.

Stella Adler Academy of Acting & Theatre – Los Angeles welcomes actors from around the world to grow and foster their talent within our walls. Students need not have any performance background or previous training to apply.

Although we have many working actors in our program, we welcome beginners or the curious. We offer a tour of the facility and a chance to audit a class for all applicants.

Click on the class names below to read more about the class, schedule and pricing.

Stella Adler Academy Technique I: Film, television and theatre are all collaborative efforts, and actors are the “doers” in each of these forms. In this very practical, yet creatively inspiring class, all concepts are made “doable” through the use of the actor’s imagination. Some of the concepts that will be covered and applied are:

This class is not a beginning acting class, it is an introduction to the very freeing and applicable Stella Adler Technique.

An acclaimed method for improving the actor’s sense of mental and physical ease and flexibility. This technique provides a means to change unconscious habits of excessive tension into an integrated, poised use of the whole Self (mind, body, especially concerning breathing and voice). Students will receive hands-on guidance from the teacher in order to identify their own habitual movement patterns. This awareness provides a great sense of openness and ease, optimizing the actor’s potential. The actor learns to use the technique in performance to develop their craft, as well as in daily activities to help prevent injuries.

The confident actor uses the principles of the Alexander Technique as a tool to be present and stay connected. After having the experience of the first Alexander Technique class (Alexander Technique I), the actor is ready to come to the Advanced, in order to explore more deeply the use of the self, and to carve deeper into the actor’s craft. The understanding of this process can enable the actor learn to choose more wisely. We will explore in depth how the Alexander Technique fits in perfectly when entering the stage: Maintaining a sense of lightness (and light-heartedness) in any audition; speaking without tension and strain. Furthermore, we will apply AT “tools” to monologues, scenes, mock auditions, cold readings, and in front of the camera. You’ll still receive the hands-on guidance from the teacher, as well as practice quieting your nervous system and releasing unnecessary tension with Constructive (Active) Rest. You’ll train yourself to be highly aware of your acting instrument, having the skill to stop unwanted habits and to make clearer and more confident choices.

Through the use of theatre games, improvisational exercises, and scene work, the actor learns to leap past boundaries and move forward into strong choices in role playing, characterization, and interrelating. It is a class to explore freedom of imagination and experience acting.

An intensive psycho-physical approach to movement training. In this class, actors develop a detailed technique for how the thoughts and feeling of their characters are expressed through physical movement and behavior. During this introductory term, a large emphasis is placed on self-awareness. Actors develop an understanding of their own physical habits and learn techniques for moving beyond those habits. This gives actors the freedom to engage their bodies in new ways in their acting and to make choices that serve the truth of their characters. This is a valuable class for students of all levels.

In this class, in addition to exploring the more advanced exercises of the Lucid Body technique, students have an opportunity to deepen their experience of the work and to explore the connection between their movement foundation and their acting process.

In this course actors explore techniques for developing ‘Presence’ in acting and they develop skills for connecting, or relating, the body to the many relationships and circumstances of a play.

A step by step process for the advanced actor, covering the preparatory work that is done before the final callback audition and the acting breakdown of the full script before the actor arrives on set to shoot. Only film scripts are used and all work is done on camera. Adjusting the actor’s instrument from Stage to film is emphasized.

A continuation and expansion of the foundation camera work from Adler On-Camera Technique I. The demands of shot size, angles and coverage will be emphasized, while learning how to keep multiple “takes” consistent, yet spontaneous, will be practiced. Some scenes will be “shot” quickly and with little rehearsal, so the actor becomes familiar with the pressures of episodic television work. Again, actual screenplays will be used for all in-class work. An additional emphasis will be added to burnish the students self-tape skills, and all work will be viewed and evaluated in class.

This is the final production of the Full Program. By this point, the student-actor is expected to work independently on all script analysis and character work so that his/her individual work contributes to the play and the ensemble in each progressive rehearsal. This reinforces the purpose of the Two Year Program: to train actors to be self motivated to work on all aspects of his/her character on their own, so that he/she can come into ALL acting roles armed with interesting, creative choices that lead to fully realized characters. The student-actor learns not to need the director (or anyone else) to hold their hand, yet that same student-actor learns to be able to take direction and make it doable.

A progression and advancement of the work established in Scene Study, delving more deeply into the discussion of text and character.

This class explores the very first steps of creating a role. It can be described as the “table work” that the serious actor must do. From the title to the closing scene, the script is analyzed for the writer’s intent, theme and genre. At the same time, research into the time-period, place, socio-economic background of the character, etc. is discussed. This information is then used to begin building a character that serves the script and brings the character to life in a creative, truthful way. The work learned in this class sets the actor on the right course, and is a big step toward the student-actor becoming a creative, independent actor who can handle any type of script with confidence.

This class is the practical application of the principles and technique’s that have been taught in the first year. We pick up at the “table work“ from Script Analysis with a step-by-step process for breaking down the material, building a character, applying a practical, do-able understanding of sequence, playing of actions and rehearsal technique. Using a full published play by a major playwrite the actors work on their feet, on the platform.

A continuation of the work from Shakespeare I, students produce scenes from Shakespeare’s plays. There is further emphasis on script analysis and deep character development based on the embedded clues provided by Shakespeare.

In this course, students are introduced to the sounds inherent in General American Speech and learn to identify the sounds they are making in comparison with this standard. Sounds are taught using the International Phonetic Alphabet, a notation system which allows students to visualize sounds and apply the correct sounds to their text work. Students leave with an awareness of their own speech patterns and tools with which to make changes. Required text: Speak With Distinction, by Edith Skinner.

This class trains the actor to free the natural speaking voice by learning and exploring the classic progression of the Linklater voice work. The actor will learn a series of physical and vocal exercises that will free the voice from tensions and negative habits while developing, strengthening and expanding vocal range, power, resonance and clarity. The actor will explore a piece of modern text in this class.

This class continues the Linklater voice progression with a strong focus on development of the speaking range, articulation, and emotional-vocal connections for the actor. They develop the tools of pitch, rate and volume to structure the work, and learn to allow their voice to respond to their imagination and interpretation of the material. The actor will explore a piece of classical text in this class. 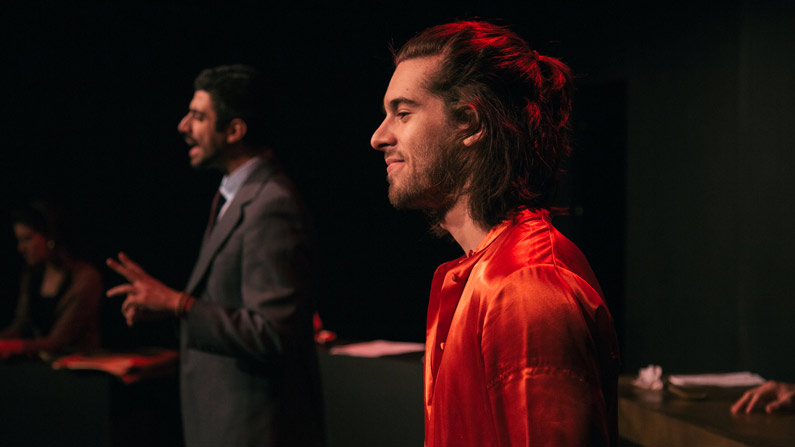