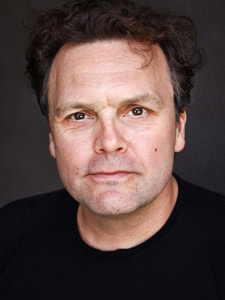 Chè Walker is a graduate of Webber Douglas Academy of Dramatic Art. He has notched up over forty professional Television Acting Credits and appeared in ten professional stage plays, before becoming a playwright. His first play Been So Long premiered at the world-renowned Royal Court Theatre in 1998, and subsequent translations and productions include New York, Los Angeles, Seoul, Paris, Dortmund, Oslo and Copenhagen. His second stage play Fleshwound premiered at the Royal Court in 2003, and won both The George Devine Award for Most Promising Playwright and an Arts Council Writer of The Future Award. Crazy Love his play for Paines Plough Theatre Company, premiered in Oran Mor, Scotland before transferring to The Shunt, Central London in 2007. In 2008, Chè made theatrical history when his play The Frontline became the first contemporary-set play to be performed at Shakespeare’s Globe Theatre in London since Merry Wives of Windsor in 1597. Other writing credits include, The Frontline (2009), Lovesong (2010), The Eighth (2011), The Lightning Child (Shakespeare’s Globe Theatre 2013), and Klook’s Last Stand (Park Theatre London 2014). Chè has taught acting at RADA, Central School for Speech and Drama, East 15 and the Arts Project for Socially Excluded Youth. He was also Head of Acting at the Weekend Arts College for over ten years. He has taught writing for the Royal Court Young Writers’ Programme, in the Feltham Young Offenders’ Institute, at the Centre Point Homeless Shelter, and for Hampstead Theatre Youth Project.

Che’s film, Lexi and Micky, was selected for the Hollyshorts Film Festival and screened at the TCL Chinese Theatre in August 2018. Written and directed by Che Walker it stars Stella Adler Alumni Meghan Leone Cox, Alexandra Lemus, Job Camarena and Ray Nicholson. Past work includes, Flower, which was selected for the Dances With Films Festival, Hollywood in June 2017. The film features Stella Adler alumni including Montana Roesch in the lead, Mattia Bartoli and Austin Iredale in supporting roles, Christina Blum as Art Director and December Ensminger as 1st A.D.